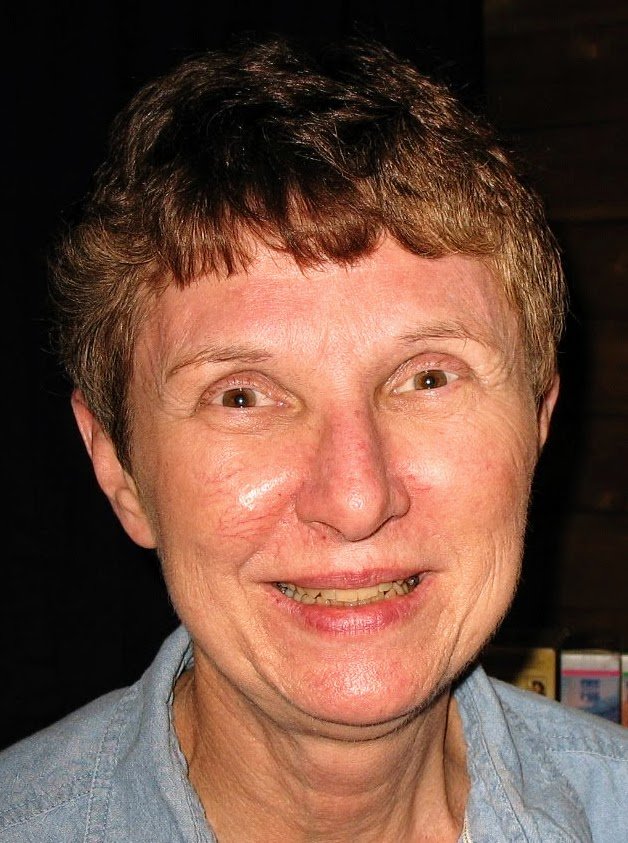 Funeral service at 3:00pm on Saturday, September 26 will be live-streamed.  The service will also be available for 90 days following the service using the same link.

While still a young child, Pat moved with her family to Westbrook, Connecticut. She lived there with her mother, grandparents, and great-grandmother, and enjoyed frequent visits from her cousins Kathi and Anne, who were like sisters to her. In school, while known by classmates and teachers as the sweet, quiet one, Pat also was recognized for her talents as a gymnast and, during her high school years at Westbrook Junior-Senior High School, as a majorette. After completing high school in 1964 and then a year of college, Pat began working in the Registrar's Office of Yale University.  While at Yale, Pat began the "foreign travel" thread in her life with two trips to Europe.  She met her future husband, then a West Point cadet, at a dance at Yale, as he was visiting as a member of the West Point chess club.  Pat and Mike (like most Irish jokes begin) were married in Branford, Connecticut, on June 6, 1970, the 26th anniversary of D-Day.

As an "Army wife," Pat spent three years in Germany, where her first son was born, followed by a year and a half in Virginia, where her second son was born.  She enjoyed traveling while in Germany, including skiing in southern Germany, taking visitors to the "Iron Curtain" between West and East Germany, and visiting West and East Berlin.  During the following several years in Virginia,  Pat raised two boys, worked at several jobs, and completed a course to become a travel agent.

After she and her family moved to Broward County, Florida, Pat worked at Alamo Rental Cars while continuing to raise her two boys.  She also persuaded her husband to take the Foreign Service exam, which he passed.  This led to the family's returning to Virginia for training and the birth of her daughter, and then to living in four countries - The Philippines, the UK, India, and then Japan - before returning to the USA. Throughout her travels, Pat did extensive volunteer work, such as assisting at a Home for the Destitute and Dying in India, and serving on the Outreach Team at her church in Virginia. She was a cheerful giver, and received a Volunteer Award from the U.S. Embassy in New Delhi, India, for her work there.

While Pat enjoyed living in the Philippines and India, the UK provided her with a rich base from which she conducted extensive genealogical research, continuing the "family history" thread in her life that began before she was born with the publication by Selah Youngs in 1907 of the Youngs Family History.  From when she was a child, Pat was captivated by history, genealogy, and more specifically by the history of her family from England and into the New World.  Later in life this would result in her creating the Youngs Family Society and its accompanying newsletter. This allowed her to connect with numerous distant relatives resulting in a “family” reunion in 2000 in Southold, New York. Mostly through email correspondence, she assisted countless others who contacted her, searching for information about their family’s Youngs connection.

In Japan, Pat began the "writing" thread that continued for the rest of her life.  She spent months visiting, deciphering, and researching the cemetery inscriptions at the Gaijin Bochi (Foreigners Cemetery) in Yokohama.  Her book detailing these inscriptions was published in 1994 by the British Association for Cemeteries in South Asia (BACSA) in London and to this day remains the only historical record of its kind detailing the more than 4,000 souls who have rested there since 1854.  After Japan, Pat and her family returned to Virginia where Pat wrote several articles on Virginia history for Potomac Living Magazine.  It was during this time that Pat purchased a small summer cottage on the beach in Lubec, Maine. She enjoyed beating the Virginia heat every summer by packing her daughter and her dog into her little car and driving up to the refreshing Maine coast.

Having grown up in Connecticut, Pat loved New England and, in the spring of 2000, after Mike retired from the Foreign Service, Pat and Mike moved to Whiting, Maine, purchased the Puffin' Pig gift store, and renamed it The Puffin Pines.  Having also converted her summer cottage into a vacation rental, Pat began the “business owner” thread of her life. Pat ran the Puffin Pines for 16 years, working with suppliers far and wide to create a quintessential Maine gift store, before she and Mike returned to Virginia in 2016 to live most of each year.  While in Maine, Pat and Mike took on the unexpected role of raising four of their grandchildren.  Pat was very passionate about her family and when a need arose, she did not hesitate to open her heart and home.  She also took great joy in opening her summer cottage to family and friends, thus facilitating the making of many happy memories on that beach.

Pat always put family first, wanting to hear about the latest accomplishments or challenges of her children, grandchildren, and more recently great-grandchildren, as well as her extended family.  She also relished the friends she made in school, while living overseas, and in Virginia and Maine.  In her later years, Pat enjoyed maintaining those friendships through Facebook.  When she heard of a friend in need, she was always ready to, at the very least, provide a listening ear, extend a word of encouragement, and offer a prayer on their behalf. Her warmth and generosity will be remembered by all whose lives she touched.

Pat's funeral will take place on Saturday, September 26, at 3:00 PM (with a viewing beginning at 2pm) at the Adams-Green Funeral Home in Herndon, Virginia.  Anyone who can attend is most welcome.  The service also will be live-streamed over the Internet, and then saved for three months, at the funeral home's website, adamsgreen.com, which also has additional details about the funeral service.

The following Saturday, October 3, at 2:00 PM, Pat will be buried in the cemetery of the First Presbyterian Church in Southold, Long Island, NY (fpcsouthold.org).  This church was founded in 1640 by Pat's ancestor, the Reverend John Younges, who, with other families, had traveled to Southold from Southwold, England.  All are welcome to attend.  The burial service will be recorded and made available online at a later date.

Please note that for both the funeral service and the burial, face masks and physical distancing are required due to the ongoing pandemic and local regulations.  People planning to travel between states for the funeral or burial also should be cognizant of how local quarantine requirements would affect them.

Share Your Memory of
Patricia
Upload Your Memory View All Memories
Be the first to upload a memory!
Share A Memory
Send Flowers